43 shares
This post may contain affiliate links. You can read the full disclosure policy, which is pretty dull, but here it is.

Dealing with matted cat fur on your Ragdoll isn’t such a big deal especially if you are diligent about grooming your Raggies regularly.

Even just a light brushing from time to time will help to avoid nuisance matted cat fur.

Do All Ragdolls Get Mats?

Technically speaking, the Ragdoll breed doesn’t have a true undercoat, meaning there isn’t a thick layer of fur next to their skin. No true undercoat should mean their fur won’t mat.

However, in the real world, Raggies do tend to get mats from time to time.

The best way to deal with matted cat fur on your Ragdoll cat, is to not let them develop in the first place. 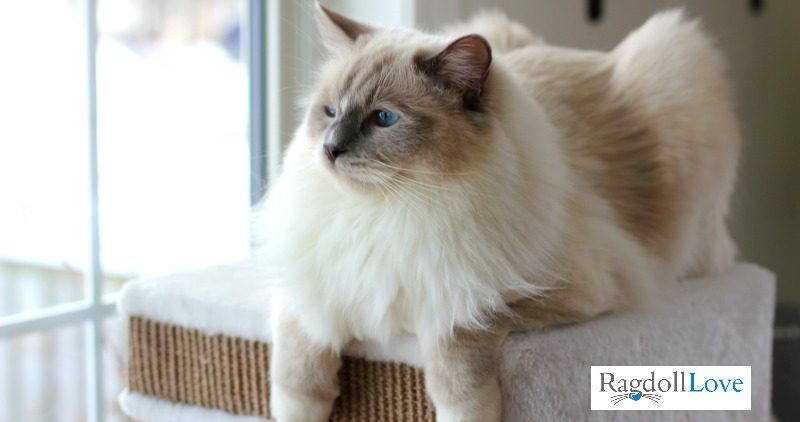 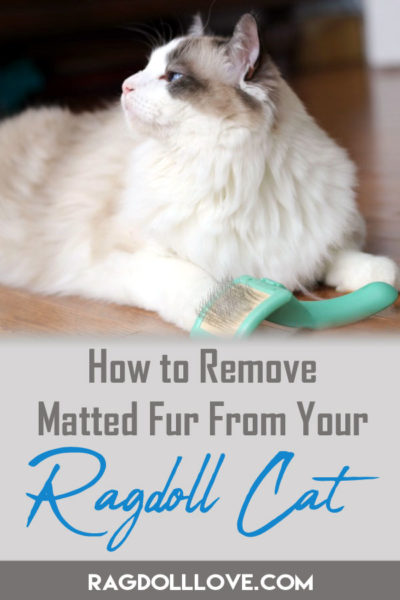 How to Remove Mats

I always recommend working out the mats with a brush or comb and your fingers, but sometimes that just doesn’t work.

If all else fails, you may need to cut out the mats.

But do use this as a last resort. It’s very important NOT to cut the cat’s skin. Be gentle and take as much time as needed. That way, no one gets hurt!

Scissors can be used and used with caution. If your cat won’t lie still and is a bit strung, don’t attempt scissors.

I have used scissors on my Ragdolls as they are so docile and never move when I’ve had to clip out fur clumps.

Removing matted cat fur with clippers is an option. It’s possible to buy a cheap decent set of clippers for this use.

Many vets will advise that scissors should never be used, only clippers, but I don’t agree with this completely.

In my opinion, that’s every bit as damaging or perhaps more so than a small set of blunt end scissors. Cats can get pretty freaked out by the noise from the clippers too, so take that into consideration when deciding how to remove the matted fur from your Raggie.

Either way, it’s imperative to move slowly and methodically with either scissors or clippers.

This is a handy little reasonably priced tool, which works very well. It’s certainly worth a try!

Taking Your Ragdoll to a Groomer

You may decide to take your Ragdoll to a groomer to deal with the mats.

Sometimes it’s necessary to take your cat to the groomer, but personally I like to deal with the mats on my own.

That way I don’t traumatize my boys and can work the mats methodically and carefully, and be in charge of damage control, so they don’t end up with hideous bald spots!

Don’t hesitate to use bribery when attempting to deal with matted cat fur on your Ragdoll cats.

Haul out some of your Raggie’s favourite munchies and keep them on hand to reward him from time to time, as the de-matting process moves along.

My boys will leap to the counter top where I groom them the moment I pull out the grooming tools as they know brushing = treats.

If you’re a Ragdoll owner (or any other long haired breed of cat), you’re bound to encounter a few mats over the course of your fur babe’s lifetime, so be prepared to tackle them head on!

Still the best way to avoid mats, is regular grooming… kind of like preventative maintenance!

RagdollLove Home | Getting to Know Your Ragdoll 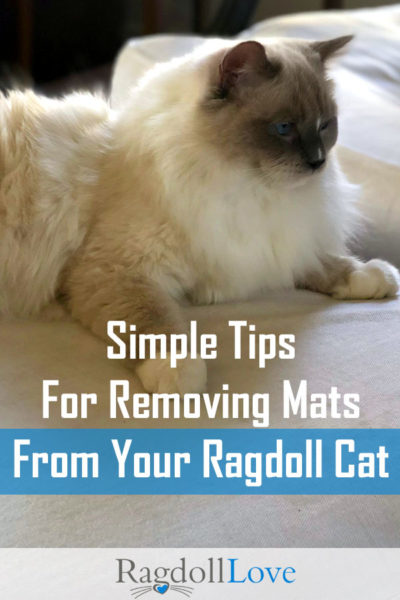